Where There’s Smoke, There’s… Wait, What, No Smoke?

It’s early Friday morning, only nine or ten hours after President Trump ordered an air strike on a Syrian airbase in response to Bashar al-Assad using poison gas on his own people. The first videos and photographs from the airstrike are filtering in to American television as I sit here with a cup of coffee, and while reactions from most Americans and our allies are positive, there are those who question the attack.

What I fail to see is the result of the airstrike. After being hit by 59 Tomahawk cruise missiles in just a matter of minutes, one would expect burning aircraft and fuel dumps to dominate the photographs. What the Syrian television is showing are a bunch of bombed out hangars and buildings.

The destruction of the facility is obvious, but where’s the smoke? Where’s the fire? Where are the airplanes that should have been there? When Secretary of State Tillerson warned the Russians of the impending airstrike, did they notify their Syrian buddies as well? What’s going on here?

While President Trump defiantly tells the world the United States will militarily defend the very people he won’t let enter the country, one has to wonder if he really went against Russian boss Putin, or was this just another case of collusion to befuddle the media and citizens alike. What was the real purpose of the airstrike?


It is a multifaceted answer, with fingers going in every direction, but for Donald Trump it is a win/win gamble, the only kind he likes. He improves his image of planetary citizenship while not hurting his chances of a future relationship with Russia, and he gets to deliver a message to the real threat to the United States, the only one Trump really cares about; North Korea. And he is using North Korea’s biggest supporter as a messenger.

Trump’s actions just said to Chinese president Xi Jinping, due to arrive for a meeting with Trump today, “Here’s a taste of what we’re going to do to your fat little friend in North Korea if you don’t stop him.”

I have no  doubt Xi Jinping will sit there, having already seen his own satellite photographs of the Shayrat Airfield damage, and the Russian, professionally videotaped drone fly-through, taken within a matter of hours. He will have already listened to the reports of the U.S. Secretary of State Tillerson’s conversations with the Russians explaining the attack. 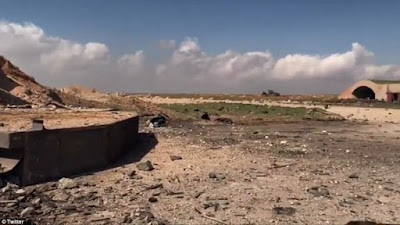 Xi Jinping will be impressed with the incredible accuracy and reliability of the final iteration of the BGM-109 Tomahawk cruise missile. Its ability to avoid the two Russian sections of the airbase while taking out individual bunkers elsewhere on the base with pin-point accuracy will cause him to re-evaluate his air defenses and ponder how to nullify the US's Achilles Heel, the GPS satellites. He will also be impressed with the absence of actual damage to Syria’s air force. There will be damage to almost every bunker, but according to the Russian video shown on CNN, the damaged aircraft, to me, looked more like AWOP, or aircraft awaiting parts than first-line combat aircraft. There is no burning fuel from the targeted fuel storage areas.

As they dine, an aide will lean over and whisper in the Chinese Premier’s ear that the airfield is already back in action. Xi Jinping will realize the scam, but he will show no sign of recognition to alert his unsophisticated host.

Trump will toast his guest and smile. He is saying to the Chinese President, by implication, “Let’s make deal!”

Xi Jinping will smile but say nothing. Trump is about to meet the master deal maker.

[ED NOTE: For those unfamiliar with Air Base Operations or attack, I have included a photo, photographer unknown, of the simple mortar attack on the operational USAF combat base at Da Nang, Vietnam, 1967 -