The few cars that sped under the narrow stone bridge that crossed over Bundestrasse 51 on its dead-end path to the Ehrenfriedhof cemetery were fascinatingly quiet. You could barely hear the wind or tires as they sped along underneath. The cemetery lay at the end of the bridge, just the other side of the usually heavily traveled main highway that skirted the small town of Bitburg.
Little did I think, walking sheepishly with my first German date along the quiet, two lane road through the rolling farm land, that a President of the United States would create an international furor by driving down this same road some twenty-four years later.
When President Reagan stopped to pay homage to the German and American war dead in May, 1985, he created an international maelstrom of controversy with those who want to keep the crimes of the past in the forefront of our relations with Germany. A year after Reagan's visit, I couldn't help but be struck by how quiet the German countryside always is. Memories rise effortlessly in the silence. The emotions always follow.
In the media event that was the President's visit, no one looked toward the second hill top to the right. There is an abandoned missile site there. In fact, there are several missile launch and maintenance sites nestled in the woods on the not-so-distant horizon, but no one pointed them out to the visiting dignitaries.
When I visited in 1986, the U.S. Army had just removed a Patriot battery from our old site VII, just overlooking the town of Rittersdorf. Both sites have long since been deserted. The only remnants of the old, original Matador pads are worn, beat up patches of seemingly misplaced asphalt. The Mace B sites, however, will be there for a long time. Perhaps as long as the Roman ruins that are only three or four hill tops to the right of the Rittersdorf site. If you look toward the remains of the Roman site at Otrang, you have to overlook the massive remains of one of the largest bunkers left over from Hitler's Siegfried line in the Eifel area of Germany.

The bunker is always overlooked. The remains are broad and angular, but not tall. They barely protrude above the farmer's field that dominates the top of the gently sloping hill. It is the highest hill in the area. If you don't know what you are looking at, you simply won't know what it is. Only nondescript slabs of reinforced concrete, blown apart in a war that will someday also be forgotten. It is nine stories deep. 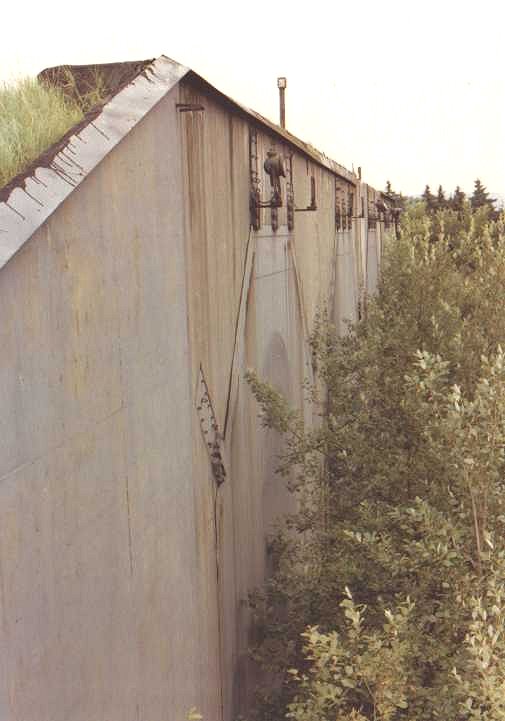 The Mace launch sites, however, jut up from the earth looking like massive chambers to the underworld. They sit gathering growths of foliage and shrubs over and around the massive one hundred ton launch doors. Eight vertical doors, side by side. Covered with earth at a long slope. There are four bays in the first half and four in the second half, all sitting securely inside the double security fences.
The entrance to the remainder of the underground complex is located inconspicuously in the center of the asphalt apron spread before the massive doors. There are eight more such doors, sitting idly by to provoke curiosity from the riders of the local Bundespost bus that turns off the B-51 Trier highway and drives the few kilometers to Idenheim. The site is barely off the main road. If you look straight ahead past the Ehrenfriedhof, you look into the rear slope of the forest behind Oberweis. That was our MSA, our Missile Support Area. No one bothered to ask what it was.

We had been among the first US missile men in Europe. In fact, the very first operational missile squadron in the United States Air Force, on duty since 1954, had first been assigned here. Already forgotten. The TM-61-C Matador that had been erected as a memorial at the corner of Mace & Matador avenues in the MSA has been removed. Only the cement cradle remained on my last visit, cracked and fading. If you hadn't seen the missile in place, you would see no possible use for the structure. Bitburg Air Base is closed now. Just inside where the old main gate was located, right in front of the former base library, there was a monument. It was a replica of the US Air Force Missileman's badge. It was mounted on a granite obelisk. The monument was dedicated to the men who manned the first Matador units in Europe. It has been removed and no written history of its removal exists.
No reporters mentioned any knowledge of this quiet farming community in their coverage of the Reagan visit . Perhaps they didn't know that the only hardened American missile launch sites in Europe were right behind where they were standing. After the Cuban Missile crisis, they were the only nuclear missile sites the United States had in NATO.

But, then, that wasn't the story the media wanted to cover.